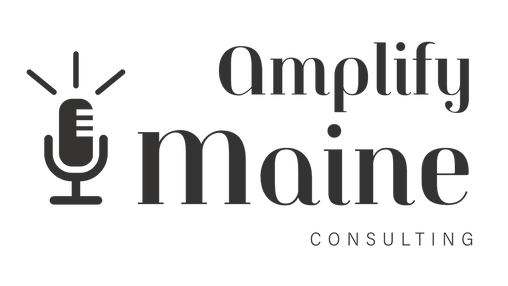 Amplify Maine Consulting is a full-service public relations firm that amplifies your brand to elevate their awareness with strategic communications and digital marketing solutions.

We understand what it takes to have a compelling message and for that message to be seen and heard across multiple platforms.

​Helping organizations amplify their brand, empower involvement, and increase public awareness of their mission is at the core of this small business.

Justin’s communications consulting work is grounded in the belief that everyone has a story to tell. His background in government and nonprofit management helps shape his role navigating clients through their various PR challenges.
​
Justin made history in 2012 when, at just 21 years old, he became Maine's youngest lawmaker and the nation’s youngest openly gay legislator. He was sworn into office just a week before graduating from college. Since then, Justin has spent nearly a decade in public office.

He is a former 4-term Maine lawmaker having served 4 years in the Senate and 4 years in the House of Representatives. Justin’s public service career began in high school at age 17 when Governor John Baldacci appointed him to serve on the Maine State Board of Education, making history as the first student board member.

He currently serves as a Maine-Canadian Legislative Advisory Commissioner and a member of the Maine Right to Know Advisory Committee, after being appointed by Senate President Troy Jackson in 2021. In these roles, Justin works to strengthen cooperation between Canada and Maine as well as works to improve public access and transparency in government.

​Justin has been recognized nationally by The Advocate magazine, listing him on their list of the 40 Under 40 most accomplished leaders throughout the entire country. Two sitting U.S. Presidents have honored his volunteer work as the recipient of the Volunteer Service Award; in 2008, by President Bush, and in 2016, by President Obama. He also received both the Governor’s Exemplary Service Award in 2009 and a Mayoral Certificate of Service for his leadership in the community in 2020.
​
​He graduated from Northern Vermont University-Lyndon with a B.S. in Broadcast News and was named the Outstanding Young Alumni in 2019. Justin went on to earn a Post-Baccalaureate Degree in Public Administration from the University of Maine at Augusta. After receiving a national fellowship, he also earned an Executive Certificate in Public Leadership from Harvard University's Kennedy School of Government.

Amplify your brand. Elevate their awareness.